Is there anything in this world that is more of a buzz-kill than driving through a neighborhood, noting that every doorway is darkened by entitlement consumers and illegal aliens of the female gender. 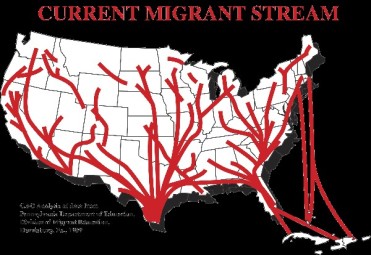 Each surrounded by two, four or even seven little undocumented immigrant babies securing her “right” to live off the public dole?

These mothers, rather than work for their keep, prefer to spend their time producing babies and sending what income they produce, between whelping, out of the country or on crack and beer. Their children grow to be Democrats, drug dealers, and MS-13 terrorists.

Is there a neighborhood that does not suffer the blight of their existence?

We can’t just round em all up, put em on a flat-bed and send em back to where they came from – Who would do the jobs we’re too good for?

Bleeding heart liberals would throw a fit anyway, and it wouldn’t resolve the issue of the next crop of babies at the border.

I am convinced that any man or woman who might devise a solution to the undocumented baby problem would surely be declared a “Savior of the Republic,” and have a statue erected in their honor at the entrance of a Trump golf course.

Many years my thoughts have been consumed with finding a solution; a solution that will cure a Pandora’s Box of problems this plague inflicts on our nation.

With this goal, I present a “Modest Proposal” to overcome the undocumented immigrant baby problem. My scheme will even solve the problem of voluntary abortions and that horrid practice of women murdering their bastard children, now so frequent among us.

We should be fed up with Liberals sacrificing their poor innocent babes, creating a public expense – With no return on investment!

Where is the fiscal responsibility?

Of all the major expenses included in the entitlement budget, food stamps are the major cash drain to the economy.  There are six states that average over 20% of their population recieve food stamps to feed their unproductive progeny.

I have it on very good authority, from an Arkansas acquaintance, that undocumented immigrant babies, although each has its own regional flair, can be quite satisfying. 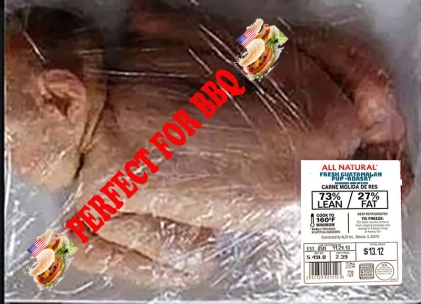 He assures me that a young healthy undocumented immigrant baby, well nursed, is at a year old a feast worthy of true praise…

A clear source of nourishing, and wholesome food, whether stewed, roasted, baked, or boiled; and I make no doubt that it will equally serve in a quiche or lasagna.

I propose we turn this into a self-perpetuating, self -funding investment? Better inventory control is a must, of course.  Losing 1400-plus units to non-paying consumers because of an accounting error can never happen again.

Even the worst crack addict or illegal alien is able to nurse a human child to one year, thus limiting the feed expense. We are already feeding the mother – let her feed the baby.  Harvested at one year, each could provide two or three meals for a family of three, and imagine the feel of “Baby’s Butt” gloves.

If played right, a new export industry will flourish creating jobs for real Americans while effectively deporting thousands of rapist and murders one glove at a time. Can you fathom the luxury feel of gloves made from “Undocumented Immigrant Baby Behind?”  I expect them to be all the rage in Paris and Moscow.

I’m already trying to decide if my wife would prefer Asian or Arab baby butt skin gloves. Rougher hide, like arms and legs, could easily be repurposed as Push-pull Tube covers on Military Helicopters.  The material is already the right shape – all that’s needed is a zipper.

Recycled and repurposed by Dept. of Health and Human Services, undocumented immigrant babies would swiftly become a new renewable national resource.  A quick calculation reveals this to be approx. 1.2 million undocumented immigrant babies available for recycling each year.  School districts could serve “baby-burgers” – tender and nourishing, to the children that should normally be refused a school lunch for being poor.

Commercial prisons could increase their ration of red meat to non-violent drug offenders and the possibilities of industrial uses for scrap parts are unlimited.

Imagine the joy of little girls with an authentic stuffed “baby Skin” doll to push around in a stroller or a “Baby Butt Bowler” for the man in your life; luxury of that level could rekindle the entire US hat industry.

Undocumented children of this age don’t produce; they don’t purchase goods or manufacture a useful product.  The average cost to the taxpayer is approx. $22 a head. There is no return on investment. The ones who survive grow up to be Anchor Baby mills. The burden grows with each birth cycle.  My solution will turn this $22 loss to a net gain and put an end to the madness.

Alas, I must confess I have no real interest in this issue…

I have no energy or time to worry about it…

I’ll leave that to the politicals who have openly declared they would dismantle the parts of the constitution that don’t support their policies. They will present proposals as or more ridiculous than mine.  Theirs is an obsession is with the less than 3% of the budget consumed by entitlements and other “The sky is falling” issues – rather than the real problems this Republic faces.

Author’s note:  You students of literature who think this is just plagiarism of a famous 1729 essay – Good Catch, you’re paying attention, but who reads Swift nowadays anyway – only Nerds will notice.

One thought on “A Modest Solution… Gideon D. Asche”