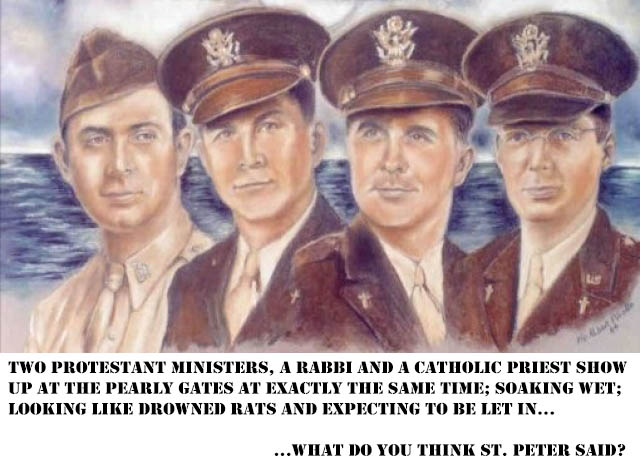 Two Protestant Ministers, a Rabbi, and a Catholic priest show up at the Pearly gates at exactly the same time…  soaking wet…  looking like drowned rats and expecting to be let in…

…What do you think St. Peter said?

My bet is he didn’t say diddly; he simply snapped to attention, rendered a crisp salute and opened the gate – The Four Dorchester Chaplains were home.

On 3 February 1943 the troop transport ship Dorchester was torpedoed while in route to Greenland. On board were over 900 Americans including 4 chaplains of different faiths.  Aside from attending Harvard together, the four men had but two major things in common – the same God and the same flock.

Only 230 of the men who went into the water that day were rescued.  Four who survived were wearing lifebelts bearing the names: Chaplain George Fox, Chaplain Clark Poling, Rabbi Alexander Goode and Father John Washington.

The four were observed, by rescue personnel, mistering to their flock right up until the end – they were last seen standing together, on Dorchester’s deck, with locked arms singing hymns as she went below the icy waves.

The Four Dorchester Chaplains were recommended for the Medal of Honor but the stringent requirement of “actions under enemy fire” was technically not met, it was denied.

As a result, President Eisenhower ordered a one-time-only Posthumous Special Medal for Heroism be authorized by Congress and awarded.  The special medal was intended to have the same weight and importance as the Medal of Honor.