Do you remember the day the world almost stopped turning?
Gideon D. Asche

Have you ever heard of Stanislav Petrov?.

Probably not, you have no reason to… but you, and I better hope such a man is standing in the gap for us today. If the cowing down to, and personality cult of our current occupant of the Oval Office is as rabid as it appears we are going to need such a man.

History is full of the consequence of no longer questioning and believing any leader is infallible, a god unto himself.  – It always leads to war.

The last time real war took place on our mainland was almost 150 years ago… we’ve forgotten what it means.  As Americans, we have no understanding of the consequences of war on our shores.

As Soldiers, we have never had to worry about what was happening at home. If our loved ones were dead, captured, or worse.  We have no concept of what it would mean to live under siege, reduced to the most primitive aspects of life.  Eating your pets to survive because if you don’t… someone else will.

I heard Petrov’s story years ago, not by name that wasn’t public until the last 15 years or so.  I never considered that it might be true until I saw his obituary and a confirmation of the tale Janosh told me.

I spent most of the 70’s and 80’s as a spook wandering the Soviet world. Most of the time, I passed myself off as a Teacher, Tour Guide, or on occasion, even a Western Communist (I’m probably still listed as a member of the KPD on some historical roster). 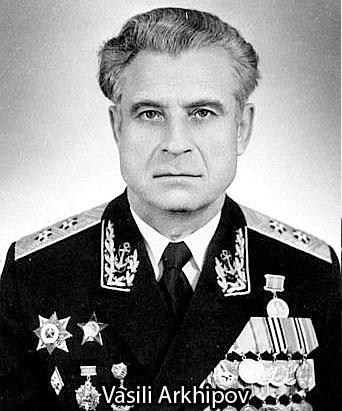 I knew about – the Soviet Admiral, Vasili  Arkhipov, and that his decision to hold out in the authorization to Nuke the U.S. during the Cuban Missile Crisis probably had its roots in the fact that he was Executive officer of K-19  in 1961 when  she melted down.  He saw the results of radiation poisoning firsthand.  He was personally exposed, and many of his men succumbed to Radiation poisoning within a month of their rescue.

This guy Janosh was telling me about supposedly stood up to the politburo and refused to fire his missiles, and it happened less than 2 years earlier.  I hadn’t heard anything about it.

Wait – You were under the impression the Cold War was actually cold, huh. –  It wasn’t.

In fact, there were dozens of instances where we were but an RCH away from a war no one could win. The Korean Tree incident, the Cuban Missile Crisis, and F.G. Powers trial are a few you might recognize, but I assure you these were minor in comparison to the real crises of the time.  No fewer than 8 times in the last 60 years we have more than flirted with destruction.

Several of them averted only by a single voice of reason unwilling to set the world on fire.

When Alexander Arkhipov’s son Vasili stood against the rest of the Soviet War council to stop a preemptive strike on Washington, as the solution to the Cuban Missile Crisis, it was the Soviets who foolishly believed they could survive and even win nuclear conflict.

By the day President. Reagan joked about “Bombing in 10 mins” it was the United States who believed the myth.

The Reagan slip is probably the incident you think of when you think of vaporization by Soviet Nukes – we got Lucky on that one. The Soviets could read about 90% of our diplomatic commo in the clear at the time because the Walkers were giving them code keys daily.
The Central Committee could tell the U.S. wasn’t about to attack simply by the fact our troops had not moved, and there was no commo between consulates. – This is the ONLY reason we are alive today.

The USSR was on the brink of economic collapse by 1984, by ’86 they were going down

for the third time.  Solidarność set Poland afire. Václav Havel’s literary stand against Communism in Czechoslovakia infected the region with a yearning for freedom. Hardcore communists were reinventing themselves to avoid the risk of prosecution for crimes against the people after the inevitable fall of the Soviet system.

The U.S.  was so eager to make a deal with Gorby, Reagan gave away the farm.  All he had to do was wait 6-months, and it would have been over.  It takes little research to discover that Putin already had his hand in the mix, long before he arrested Mikhail Gorbachev, the KGB was clocking Reagan and considered his Presidency a stroke of good fortune for the USSR.

The USSR was toast long before Reagan ever went to Berlin for a photo-op.  His apparent senility and the decision to eliminate any non-US born operators in the field, thinking they could be turned, resulted in a lot of good men and women on the other side getting killed.  Pulling their contacts without regard to the consequences was costly. – Twenty-four years of Putin is our reward.

Back to my point.

We had a plurality of fools in charge on both sides in the 80’s.  The Soviets concluded that global conflict wasn’t in their interest, the Rubel wasn’t convertible making it useless on the international market. The Soviets were busy just trying to stay afloat economically.  We were training to fight on a nuclear battlefield. Learning dosimeters, and counts to determine the distance you were from the blast.  All in the false hopes of actual survival.

My Job was to be one small part of NATO’s eyes and ears on the other side; to keep tabs on what they were up to. Who was moving where, what facilities were producing what products, and to specifically cultivate cooperative soviet resistance. Janosh was a Hungarian Engineer who worked on the Soviet Missile Program.  He had been a Mossad asset for 15 years before I met him, I didn’t recruit him.

Janosh and I had some time to kill before I could leave his home one night, it was about 1985.   We had reports of Rendőrség Checkpoints on my route back to Budapest.  Gödöllő had a Soviet military facility, so checkpoints were routine, more of an inconvenience than a threat. We always sent a local ahead to scout the road before moving at night.

Over the course of chewing the fat, ole Janosh mentioned that we both needed to thank our respective Gods that the Officer tasked with Nuking the U.S. was a man of faith.  My natural response was: “HUH?”   He explained that he heard that some officer refused to fire believing that the indication of a first strike from the US was a false alarm. He had no reason other than intuition to tell him to wait, and the Soviet Missile Command was demanding he release his weapons.

Lt. Col. Stanislav Petrov was duty officer at Serpukhov-15, a secret bunker near Moskva. At 0030Hrs on the 26th of September 1983, Soviet Missile command detected a Single ICBM launch with the warhead tracking for Moskva or Leningrad area.

Red letters “запуск – запуск – запуск” (Launch -Launch -Launch), flashed across the monitors at Petrov’s bunker.  An audible silence consumed the room.  Within moments 3-4-5-and 6 more warheads were released toward the USSR. (Coincidentally I was in Leningrad at the time and would have been part of the fireworks.)

Petrov had less than 12 mins before Moskva and Leningrad would be vaporized. It would be 8 to 10 before Soviet Ship-borne Radar could confirm – Petrov was ordered to Launch his compliment of ICBMs at the U.S. Mainland.

Atlanta, DC, Fort Worth,  New York, San Francisco, Dallas and several other U.S. cities, and their populations were about to…  simply cease to exist.

There was no way to stop the incoming warheads, Moskva would be gone no matter what Petrov did.  Petrov called it in as a malfunction saying he didn’t believe it was a real strike. As was common in the Soviet Army, the Officer in charge was too drunk to help and barely passed the message on to Missile Command.

Petrov’s orders were to launch.

Against direct orders, Petrov chose to wait until ground radar could confirm… The sun on the other side of the world crept a little higher in the sky during those 7 mins and stopped reflecting off the Northern Lights, – All indication of an attack disappeared. Petrov was ordered to Stand Down, and the world dodged a bullet, or ICBM, one more time.

The cult of personality that followed Stalin led to there being no checks and balances to his power, the same happened with Hitler, and to a much smaller extent, Reagan in the beginning. The inability or unwillingness to say NO to the Commander led to incidents like Mai lei and damn near lead to Nuclear war several times in my lifetime.

My biggest fear isn’t the mental capacity of the current occupant of the oval office or his love affair with Putin and other enemies…. I have no doubts about that.

I have no fear of Kim Jon Un or DPRK, it isn’t the unpredictability of our enemies that is a problem.  Kim Jon Un is the most predictable of enemies so far.  Even the Soviets were never as predictable as North Korea. None of the Kims have ever been a real threat. – The rhetoric is not for us. It is for his own people. No different than Soviet Propaganda or today’s tweets.

They are an insignificant threat, simply because we have the ability to stop them. It has always been that way. We take a “Go away kid, yer bothering me” attitude and the little man entertains himself. It has worked well for 50 years… But it only works if there only one juvenile in the mix. Without the voice of reason available to the executive branch.

What scares the living shit out of me is the “Predictability” of our leaders – I pray there is an American Vasili Arkhipov, or Stanislav Petrov out there between arrogant foolishness and the release of weapons.

One thought on “Do you remember the day the world almost stopped turning?”