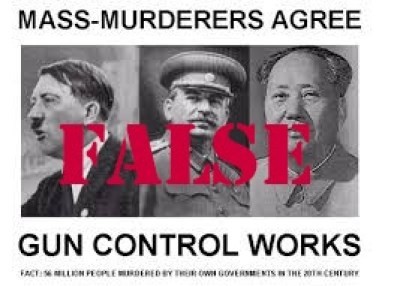 Is Gun Control really a Precursor to Tyranny?

What does history have to say about it?

A quick perusal of the history of the major tyrants of our time should answer that question.

If you Google “dictators who disarmed their citizens” you end up with a list of really questionable, crappy and false information – remember Google sorts by a logarithm that does NOT take accuracy into account. 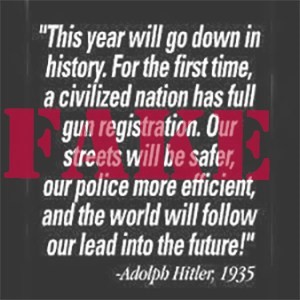 If you waste your time with sites like National Review, Breitbart or other unvetted and inaccurate sources like Wikipedia, you might come away thinking that Gun Control was employed by historical tyrants.

You would be wrong. Every one of those sites gets it blatantly wrong – some by design, I assume. They have no obligation or relationship to truth and acknowledging the truth, in this case, would hurt each of their causes.

Is it so hard to check facts?

I can’t think of any other reason that the truth is not enough…  but it appears to be anathema to those editors.

So, is gun control a precursor to tyranny?

Didn’t the father of our nation say ”

“A free people ought not only be armed and disciplined, but they should have sufficient arms and ammunition to maintain a status of independence from any who might attempt to abuse them, which would include their own government.”   — Gen. Geo. Washington

and didn’t Ben Franklin warn us with the two wolves parable?

“Democracy is two wolves and a lamb voting on what to have for lunch. Liberty is a well-armed lamb contesting the vote” — Ben Franklin

This year will go down in history. For the first time, a civilized nation has full gun registration! Our streets will be safer, our police more efficient, and the world will follow our lead into the future! — Adolf Hitler, 1935

Well, actually, NO.  Those are all fake quotes, created for political reasons. They have no connection to the truth and were never uttered in real life.

To top it off, I can’t find a single tyrant that implemented any kind of gun control legislation. None — Not Hitler, Not Mao, Not Stalin, not even Mussolini or Saddam.

It doesn’t make much sense, does it?

It seems like disarming the citizen would be the first move a tyrant would make, but that would be wrong – an invader disarms the people when they occupy new territory, and that makes a lot of sense, but any tyrant would be foolish to implement gun control.

Historically tyrants come to power by whatever means is accepted as legal – Hitler and Stalin used democracy to gain and maintain power – even Lenin waited until he had populist support and the backing of the German Government before he ever left Austria and went to Moscow.

The one thing they had in common was they didn’t care about gun control and never enacted any gun control laws. When I researched Mao, I found he was no different – he never bothered either. A couple of you probably already asked your Facebook buddy, and you’re both about to put your errant conclusion in the comments section.

Check your facts… Let me guess you, found: The German Gun Control Act of 1938. It is not called the Gun Control Act and does not implement gun control…  but what can you expect from wiki-fools? The 1938 act did not apply to anyone but those who opposed the Fuhrer.

If you dug really deep into Breitbart or some other Alt-Right political outlet you might have come up with a document that is supposed to be a NAZI anti-gun law, it even has a fake reference number, but a quick check will prove it to be a fake.

Consider your source – Wiki-fools is only as good as the high schooler who made the entry… and if you believe any article from National Review, Breitbart or the likes has any merit – you are sadly mistaken –  articles on these political outlets are easily debunked.

For the sake of space and boredom, I’m only going to address the best-known tyrant of our time – The NSDAP and Adolf Hitler. Everyone knows he disarmed the people and implemented extreme gun control so he could be a dictator. – Right?

Hitler took power via Democracy – he was elected. Nazi Germany was a hard-right democracy with a purely capitalistic economy.  The fact is most dictators utilize democracy to take power, even the soviet union had elections every 2 years. What people forget is that in a democracy, the majority can decide the minority has no right to vote.

While having some right-leaning tendencies, I consider anyone so far right as to be a National Socialist to be the lowest form of life on earth, but the fact remains… Hitler didn’t bother with gun control. In fact, German civilians were encouraged to arm themselves, and later in the war, side-arms were issued to civilians in some areas. Guns were never regulated in any way in NAZI Germany.

Any claim that Hitler enacted or implemented any gun control is simply false. Germany was saddled with extreme gun legislation imposed by the allies after WW1; everyone wanted the Kaiser’s army and his people disarmed after the War. In 1919, existing Weimar Republic laws were enhanced with a series of gun confiscation orders and legislation designed to disarm the citizenry, then the military, and finally declare a moratorium on all private gun ownership. The penalty for owning a firearm in 1919 was five yrs prison and a 100,000 Mark fine.  The average take-home wage in 1919 was 450 to 500 Marks per year –  the fine was about 2000+ year’s wages.

On August 7, 1920, the government enhanced the law to include random disarmament of individual people, circumstance by circumstance. This led to large groups being disarmed until The NSDAP took partial power in 1927.

One of Hitler’s first moves was to rescind the gun law enhancements making Germany’s gun legislation the most liberal and relaxed in modern history. No “Reichgesetz” (Federal laws) against gun ownership existed in NAZI Germany.

With Hindenburg’s death, Hitler replaced the supreme court and passed the enabling act giving the Fuhrer complete power over the law, and government. So that’s when he implemented gun control… Right? –  WRONG.

It wasn’t until 1938 that the NSDAP enacted any legislation regarding weapons and it wasn’t gun control legislation –   the actual title was “Regulations Against Jews’ Possession of Weapons – 11 November 1938,” and applied only to Jews. The rest of the German people age 18 or older were free to purchase own and shoot whatever firearms they chose.  A Permit requirement was on the books in some cities, but it was no harder to get a gun permit than a library card.

The NSDAP Minister of the Interior, Wilhelm Frick, again enhanced the 1938 anti-Jew legislation to make it a crime for any Jew to own any firearm for any reason. The only other Gun regulation implemented between 1924 and 1945 was in Poland by the occupation force.  The odds are that Hitler never even knew of that one.

Such things were delegated to the SS.  Once the order was given to liquidate the Ghettos the local commander wrote a weapons registration and confiscation order requiring all Jews in the Ghetto to give up any guns or other weapons… I guess the “Brave” Gestapo didn’t want to risk facing armed Jew women and children.

That last regulation is the one you find most misquoted, along with some of the Weimar Republic laws and Pre-WW2 occupation laws, but the Fact of the matter is Hitler never implemented any anti-gun legislation or regulations. It seems like every Alt-Right site and political outlet that thinks they have something relevant to say about the evils of Gun control relies on that Pre-WW1 law or the Polish occupation order to pass off as Hitler’s gun control.

I could have written an almost identical narration of Mao and Stalin’s gun control efforts, but it would be even more boring. They didn’t bother with it either.

BUT WHY? – Why didn’t they use gun control? Because they were smart and understood how easy the average sheeple is led astray. Any elected tyrant would be committing political suicide if they enacted gun laws.

First, it doesn’t take a genius to see that gun control is relatively useless, and second: targeting the other guy, the one your followers already believe is the source of all evil is much more effective.

Most tyrants gain power via the Democratic process or Coup. First-world tyrants like Hitler, Mao, and Stalin always gain and maintain power via Democracy and have populist support.

Each of them implemented regulations or legislation to outlaw a group of people and thereby restricted their ability to own weapons and defend themselves.  It actually made almost no difference in WW2 Europe – Most Jews, and Zigeuners didn’t own guns and the Socialists were resisting so they wouldn’t have complied anyway.

Is Gun Control a precursor to Tyranny – No! Absolutely not.

I believe all FEDERAL gun laws are unconstitutional under the republic the Founders envisioned, that’s why Madison banned the Feds from having the authority to implement gun control assigning it to the individual States and the people.

Be you pro or Con on the gun control issue, If you consider history any indication, you must conclude that Gun Control is unnecessary for tyranny.

The fact is Ronald Reagan was more against gun rights than any tyrant in history.

Gun Control is simply a choice the people have to make, it is neither an indicator or precursor to tyranny and historically only raises its ugly head when times are generally good.   Times have changed, one can effectively argue the American people are swiftly showing they no longer have the commonsense to possess personal firearms and the need to be in control of the issue is a precursor to much worse things than tyranny.

Once you have all the right labels and have properly educated your followers, society will naturally separate into your followers and everyone else. All you need is a steady propaganda push to keep the hatred alive. It took nine years, a deconstruction of legal rights under the law, a partnership with the Christian Church and the top industrial Capitalist and business leaders for Hitler to get things to the point he could declare himself supreme master and force what was left of German dignity accept it.

“People Control,”  and “Propaganda” are the first warning sign of tyranny.

When discrimination becomes law, tyranny is knocking at the door.

2 thoughts on “Gun Control… A Precursor to Tyranny?”