I fixated on the tear as it dripped from the end of my nose.

Mixed with the snot produced by a good mourning cry, it made the elongated journey downward stretching eventually snapping, then plunging the last few inches into the soft dirt where I had just buried the last Milk-Bone for Dago – She had been buried there a week before, the earth was still soft.

I was exceptionally discreet about going out to where she was buried, but when I rose I was startled to find Irinka standing behind me.  She gave me a little hug saying: “She always loved you, Gideon; you made her do her Happy Dance..”

I hugged the old woman, and I discontinued any attempt to be macho and hide the pain I felt or the fact I just buried a Milk-Bone in her garden.

During the Cold War, I did almost ten years working with a multinational Human Intelligence/Logistic support operation based out of the Federal Republic of Germany.

Our only general order was that any cargo or action had to somehow further the eradicating Communism in Eastern Europe. I’m not sure how this fits under that general order, but… When I think back on it, I would guestimate that a minimum of 15 boxes of “Large Dog Milk-Bones” made the journey from illegal black market purchase at some US military PX, in West Germany, into my hands between 1982 and 1984, only to be smuggled across one or two communist borders, then on to a small Hungarian village named Isaszeg.

Isaszeg was home to one of our most valuable anti-communist cells and assets and Dago, my dog.  Janosh, the cell leader, accepted regular shipments from us then distributed it to the various anti-Soviet cells in Hungary and Romania.

We made regular supply runs to Janosh with anything and everything the resistance needed to resist. – Money, food, medicine, explosives, blank cassette tapes,  basically anything the anti-communist resistance required to continue to resist and survive.

Situated near the town Gödöllő, where the Soviets had a major Armor repair depot, Isaszeg had a large Russian military presence, meaning an abundance of military and police patrols. All Janosh needed was the supply line, we could easily provide.

I would travel by rail, to the village,  but it was still approximately a three klick walk to Janosh’s house from the closest rail station.  Still, the risk was warranted; Janosh was in a position to be a true thorn in the Communist’s side.

We studied maps of the area and had seen pictures of his house, so it should be easy to identify. We made our way to the house, only to find the gate closed, but unlocked. A large black dog with what looked like dreadlocks hanging from every part of her body was lying in the courtyard. I learned later that this was normal for the breed, but it still looked ridiculous.

The dog stood and took an aggressive posture as we entered the courtyard, we stopped in our tracks, and I quietly called Janosh’s name, hoping he was close enough to hear. He wasn’t, and he didn’t so we stood there with the dog and waited. She wasn’t growling, but she had a look that said she would bite without warning.

A woman eventually appeared and called the dog by the name “Dago” (Dahh-Go).  Dago simply went back to her nap. Without speaking, the woman motioned for us to go into the house. Within a few moments, an older man arrived. He welcomed us and asked if we were lost. I responded with the prearranged greeting, and the man identified himself as Janosh. He introduced the woman as Irinka, his wife, and out of an adjacent room came two armed men who had apparently been there all along. Janosh introduced them as his sons.

Dago strolled into the house and came up to me, pressing her head up against my leg. The old man spoke softly. “Dago likes you… very unusual… Irinka said she didn’t even bark at you when you arrived, she barks at everybody…… Dago never likes strangers… in fact, Dago hates strangers… You must not be one.” Dago and I were to become fast friends over the next year, so much that I was known to take a box of “Milk-Bones” anytime I went to see Janosh.

10 days before I buried the bone, Andrea and I was in the middle of giving my post-mission briefing when a messenger from a sister facility arrived. As he finished his business with Manfred, the messenger said: “and there is a personal message for…”   He paused for a moment as if searching his memory…  “Gideon: is he around here?”  I said, “That would be me” with a chuckle then I heard my own breath suck in with a sharp sound as he continued.

“A message from Irinka… Dago is dead, shot by Millitz in a raid.”

Andrea spun him around and stuck her finger in his face then spoke in a voice that didn’t sound like it could come out of a woman. “You better not be *expletive deleted* around…. It will be ME!  Who *expletive deleted*s you up, NOT him!”

Andrea’s reputation for her hand to hand skills was common knowledge. The guy just shook his head. He probably had no idea that the message was literal, we used coded messages like “Granny is sick” all the time, there was no reason to think it was literal. I knew I would never see Dago again.

Manfred sent Andrea on a quick turnaround to Gödöllő to find out our situation. It bothered everyone that the message came from Irinka and not her husband. I could mean he was in custody.  Andrea got home from Hungary, and She met me up at the lake.

We sat on one of the benches as she told me how Janosh and his son were stopped at a checkpoint near Gödöllő. The Russians decided to search Janosh’s house, so they took him there with a car full of men to conduct the search. At some point, a soldier grabbed Irinka and pushed her to the ground.

My girl came to her master’s defense – and gave her life for it.

Dago injured one of the Russians severely in the groin area, but he got two shots off and my girl fell lifeless to the gravel.

The first thought in my mind was she died as a soldier, and I smiled through my tears. I stood at attention for a few moments, then I whispered, “Aufweidersehen Kleine”  (Good Bye  Little one) under my breath.

Andrea had already walked away, leaving me to my thoughts and a few tears. I appreciated it.

I rarely tell that story, but today I was dolling big dog milk-bones to my two dogs, and one of them turned to me… and with a bone perfectly perched in his mouth, smile and I thought of Dago – and discovered that even 35 years after the fact…

I’m not too old to cry for my dog.

She loved her milk-bones and, I loved her. 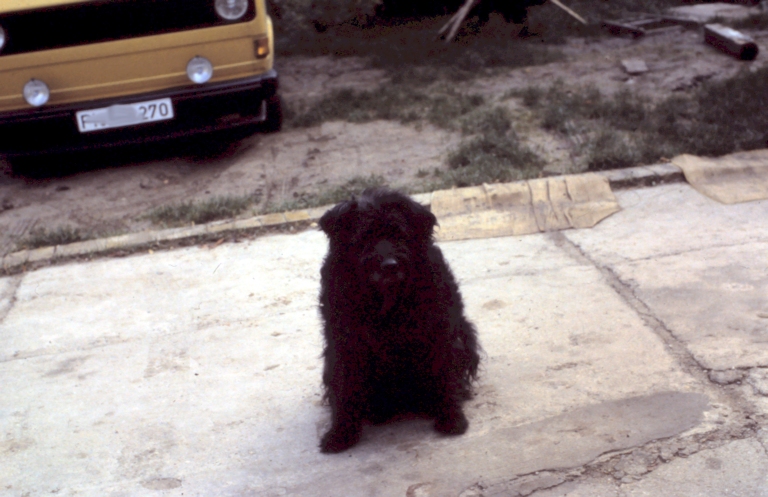