With the Iran deal, Iran received a $100 billion financial boost; it tripled their world status. Unlimited re-entry into global oil markets provided another avenue to the Islamic Republic’s ultimate goal of imposing the will of the Ayatollahs on the world and the annihilation if Israel.

The Deal was a gift to Hamas, Hezbollah, Al Qaeda, North Korea, Vladimir Putin and the New Soviets not to mention a long list of other terrorist groups and nations.

Unfortunately; the deed is done; there is no going back on it so the question becomes:

“What in the hell was the administration thinking – What kind of an idiot would make a deal like this?” 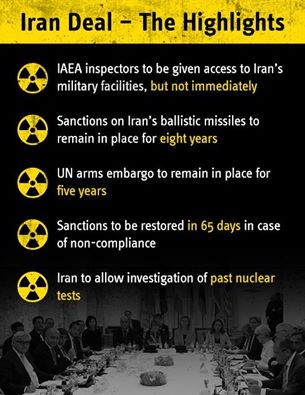 Anyone who knows anything about me, knows I’m a raging asshole when it comes to Israel so my opposition to the Deal should be no surprise, but even I have to step back and try to look at this fiasco from a position of common sense instead of personal loyalty.

Let’s explore what options we have and what the best bad choice might have been. We had three possibilities.

Option #1 – Leave sanctions in place and let Iran suffer until they comply.

Option #2 – Make a deal like the one that the last administration agreed to.

Option #3 – Nuke Iran till it glows. – (My personal favorite)

The ultimate goal of the Islamic Republic is an Islamic world – Iran is never going to willingly give up nuclear aspirations.  Left to themselves they will instigate a nuclear conflict.

If nuking Iran were a viable option it would have already been done.  The one thing BiBi,  Livni, and Bennet all agree on is that if Iran can’t play nice, they should cease to exist.

There is a reason the IDF has not shut Iran’s Nuclear program down.  No one want’s the global destruction a comprehensive military strike on Iran would bring.

That leaves just two options and to evaluate the damage done by this deal the comparison can’t be made between a hypothetical “perfect world” outcome – A nuke free Iran that loves America and the Deal.  The comparison must be between the Deal and the legitimate alternatives; the Deal vs status quo.

The Deal gave immediate relief of some sanctions with the rest being lifted in waves, the ultimate effect is that The Islamic Republic gains an influx of cash and the ability to re-enter the global oil market.  These two factors push Iran to the top of the Anti-American world.

In return, Iran agrees to do what they are already being forced to do by sanctions, only now the hindrances to non-compliance are removed.  Almost every terrorist organization in the world just had their abilities and assets enhanced and the immediate threat to the world increased exponentially.

Although it is true there are a few built-in fail-safes like the immediate reinstatement of sanctions, asset freezing, trade blockades and several international economic pressures that can be applied on very short notice.  I must ask why we would make such a deal. – History provides the answer.

This is not our first square dance when it comes to trying to force our will on another nation via economic and trade sanctions.   Experience teaches us that you can’t build a Chinese Wall around an unruly nation and expect them to rehabilitate.  It just doesn’t work that way.

After the Great War (WW1) the allied nations placed untenable economic burdens on the conquered. There was no consideration of an alternative to punitive actions against entire nations.  Entire economies were drained without thought of long-term global consequences.

The Result Was WW2.

We have made numerous attempts to ignore our enemies publicly by cutting diplomatic ties and isolating them economically with trade sanctions.  In every case, the nation involved spiraled into decay and poverty ending up a greater threat than they were to start with.

Did we accomplish anything at all by implementing sanctions against Albania, Malaysia, Viet Nam, Cuba, N-Korea – or Iran?

In the 70’s we cut ties with Iran and created the black hole that is the Islamic Republic today.  Now we are dealing with the results of that action.  In 30 years people become accustomed to hardship, they are resilient and survive; sanctions become as effective as the briar patch in the Briar Rabbit story.

Once again, why make this deal?  Why not let sanctions continue – Why not squeeze Iran into compliance?

If sanctions are effective enough to use as the “Big Stick” when Iran fails to comply, why not just keep sanctions in place and force the Islamic Republic to capitulate and comply with every request.

Why not demand a nuclear-free Iran?

To answer this fully you need to look from outside in.  The sanctions are without consequence to you and me.  Sitting up here in the Sierras sipping fine wine, Iran’s ability to buy and sell on the international market has no effect on me. Not economically, not politically, not physically and the vast majority of Americans are in the same boat.  Sanctions can go on forever and it is no skin off our collective noses.

Beyond our borders, the case is completely different.  Malaysia, France, India and several other nations are suffering economically as a result of sanctions. They can’t continue to neglect a source of economic growth and the bottom line is: they don’t have any interest in Iran’s Nuclear program.  They don’t consider it a threat.

These peripheral nations are a necessity to affect sanctions but they receive no benefit from sanctions.  Agreement to global sanctions was founded on the idea sanctions were temporary.  These nations have no reason to continue and it has become clear in the last 5 years that many were about to discontinue participation.

If just one nation dropped out, sanctions would fail completely and Iran would have an unregulated nuclear capability – Option three would suddenly become the only option.

With this deal, we have the appearance of holding a big stick but a closer inspection reveals it to be a “Nerf Bat.”   Asset seizure is easily circumvented by the correct selection of nation of deposit and the odds of reinstating sanctions after the peripheral nations have enjoyed the financial blessings of trade with Iran are, in my assessment, very small.

…it will be my brothers who are tasked to climb the beanstalk and slay the giant.

You can’t rely on reason when dealing with an unreasonable enemy.