A coalition of groups is waging a massive propaganda campaign against the president of the United States. an all-out attack. Their aim is total victory for themselves and total defeat for him.   Gerald R. Ford in regard to the effort to  impeach Presidient Nixon in 1974

I recently saw a friend’s truck parked at the Post office. A “Don’t blame me – I voted for Hillary” bumper sticker now adorns her tailgate.

I shook my head in dismay. As vocal as I may be about my disdain for the current occupant of the oval office, I have an equal level of disdain for the alternative. When the two candidates for 2016 were announced, I can remember thinking “the only thing as bad as the Trump in the oval office would be if Hillary were to take power.”

I almost didn’t vote – I have voted in every election State and Federal for the last 45-plus years, many of them absentee via my company clerk, but in 2016 I couldn’t bring myself to vote for either candidate, so I repeated my 1976 vote in the 2016 election. I wrote-in Pat Paulsen.

He’s dead… so I figured he couldn’t screw things up any worse than they were.

In the spirit of poking the bear, I tried an experiment over a few weeks. I wanted to establish just how hateful Americans can be to their own people.

I concluded that there is no limit to the animosity we are capable of showing to each other in today’s America.  – If there is a reasonable contingency, they are complacent.

The rift between Americans is like a spider web of deep fissures. The right hates the left, and the left hates the right, the hard left hates the centrist left,  the old School conservatives are at odds with the Neo’s and the middle even hate themselves.

Common ground is less common than an honest politician.

I’m working on seven decades of wandering aimlessly across this earth; I was around when we only had 48 stars, I have vivid memories of the Anti-war protests of the ’60s, and I was an active participant in the Cocaine/Contra wars south of the border, in the ’70s and ’80s.

Today the burning question in my mind is: How did we get here, and  “can the Republic survive?”

Yet; even with clowns to the left of me, and Jokers to the right, I can see a light at the end of the tunnel – I’m not convinced it isn’t a train but, I like to go down fighting and history tells me there might be hope.

I was but a wee Specialist-4, still trying to figure out which was my weapon and which was my gun when we last went through a spot this rough. But the fact is – WE DID GO THROUGH IT.

The republic did survive and, with time thrived again.

An unpopular war had just ended badly, Americans were disrespecting their own sons for being conscripted or having the willingness to serve. The Soviet propaganda machine was working almost as much overtime to influence the tide of U.S. Politics as Putin’s people are today.

The nation was divided into two opposing enemy camps –  The left was mooing a constant chorus of “Watergate,” and the right was seeing Ruskies and southeast Asian illegals around every corner.

Most of the President’s close associates were either indicted or testifying.  Congress appeared to be silently corrupt beyond the imagination and stood in lockstep behind the criminality of the sitting President.

The Republic was poised to fall from within for the second time in less than a century.

When the Vice President was adjudicated as guilty and forced to resign, the President had an ally who had recently opined that “a massive propaganda campaign” was being mounted against Nixon.  Gerry Ford openly expressed the view that the entire Watergate investigation was a “witch hunt.” It was obvious why Nixon glad Ford was next in line as VP; he was the one least likely to prosecute the President.

Nixon salted the supreme court in the same way as has been done today.  Unfortunately for Nixon, a barrage of verifiable information came to light, including testimony from the President’s attorney, documents and audiotapes.

Nixon, knowing he was about to be indicted, resigned and Gerald Ford was elevated to the office of President – Ford granted Nixon a full and complete pardon sending the left into an angry tornado of protest.

Then he committed a most severe act of heresy – The S.O.B pardoned Draft-Dodgers.

I come from a military family. My grandfather fought with the Aussies at Gallipoli. my brother was killed in Viet Nam in ‘66, my father was OSS during WW2 and killed in the line of duty as a U.S. Diplomat when I was in my late 20’s. –  I was seriously Pissed when Ford pardoned Draft Dodgers.

I held on to that animosity for the President for a long time, but as the last 40-plus years have meandered by, I think I have developed a clearer picture of what happened.

I think another Gerry Ford is exactly what this nation needs. – Maybe it is just the wine; I’ll let you decide.

Ford was a hardcore Republican with a grand total of ZERO ambition for the office of president. A member of the Warren Commission and known for an ability to communicate across the aisle, all Ford wanted was to retire as Speaker of the house, and he was only a couple of years from his goal. 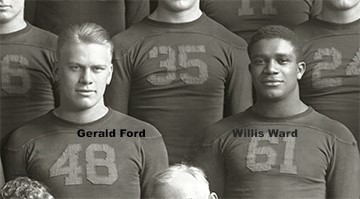 A story from Ford’s college years gives a glimpse into his character and shows what kind of a man he was.

A young Gerry Ford shared a place on Michigan’s Football Squad with a guy named Willis Ward – Ward was one of the first African Americans to be allowed to play college ball, and he was Ford’s friend.

As the Story goes, Michigan was to play Georgia in Gerogia but, Georgia refused to allow that “N****r” to walk on the field.

Ward convinced Ford to play rather than lose the game, and when Georgia’s star player, Taunted Ward from the field and called him “N****r,” Gerry Ford  lined up across from him on the next play and sent him to the sideline via stretcher.  A hand-written note was passed to Willis Ward on the sideline – “That hit was for YOU!”

At Ford’s inauguration he spoke words of wisdom, telling the world he knew what he was up against.

“I assume the Presidency under extraordinary circumstances never
before experienced by Americans. This is an hour of history that troubles our minds and hurts our hearts.”  Pres. Gerald Ford, Inaugural address

The situation today is a mirror of 1975. The President hasn’t been indicted or forced to resign yet, but there is no doubt the next power change will not be civil and might not even be peaceful.

So what happens then?

The odds are very good that the Democrats will hold both bodies of the legislature and the Oval Office. – That scares the living snot out of me, the pendulum will swing as far left in 2020 as it did right in 2016, and likely pick up momentum by the next election cycle.

Do we indict him for treason?
Do we prosecute the outgoing president for corruption?
Do we make an example out of him?

A chorus of “hell yes” filters in from the left.  Like 1975 there is ample cause to pursue legal action to the fullest extent. I have no doubt the information about to come out about the current occupant of the oval office will make Nixon look like a saint, but is that the best course of action for the Republic?

Gerry Ford faced an identical conundrum. I am confident that he held enough of a grudge over being lied to and making a fool of himself by defending Nixon’s crimes that It would have been easy to put Nixon away and flush the key. Ford was Nixon’s only friend in the end and Nixon lied to him. Ford was not the kind of man you should lie to.

But … He didn’t prosecute, he Pardoned Nixon.

Most of us believed he pardoned Nixon because he was a Republican. It was simple damage control for the Party. I think different today

I have no doubt it was an act of damage control, but I don’t for a moment believe it was to protect the Party. I think Gerry Ford was more concerned with the one thing he loved more than anything else – The United States. It was damage control, but for the Republic itself, it was America who needed healing.

We had just lived through 12 years of internal conflict; it got so bad that our own troops fired on and killed American university students in Ohio. The Panthers were openly carrying AR-15s in public. The KKK had grown to a reported 60,000 members just a few years earlier.

Ford’s opening words in his State of the Union address are more valid today than ever.

“I must say to you that the state of the Union is not good:”

The folly of continuing the course we set in 2016 is inarguable, but don’t fall into the pit of ignorance that will allow the pendulum to swing as far toward Stalin in 2020 as it did toward the NSDAP in 2016.  The entire left-wing is foaming at the mouth to get revenge for the last 4 years, and the right is bracing for the fight.

I’m accustomed to being the weirdest most radical person in the room – but, I don’t even make the top 20 list anymore.

– No one can win this fight, and the Republic will be the biggest loser.

It would require an unusually centrist Democrat to accomplish anything in the next administration – Pressure to retaliate from the hard left will likely lead to a campaign of investigation and prosecutions that rival the McCarthy era and drive the legislative branch into even more inefficiency.

Experience has taught me that investigating someone you have animosity toward leads to the “we have to get the bastard for something” school of facts. Imagine a criminal proceeding in today’s climate of conflict. The polarization of what is left of the Republic would be complete; it would create a rift that will never heal.

Gerald Ford faced the same problem and understood that unless he could force the two sides back together, the republic was lost. I can’t help but believe that Mr. Ford reflected on those words he recited as he accepted a Naval Commission in WW2, “… all enemies foreign and Domestic” – Ford knew he was facing the most powerful of domestic enemies – division and civil unrest at the grassroots level.

When Ford took command, it was within his authority to demand Canada return draft dodgers and deserters for the prosecution – every Republican in the country had united on that issue, and he could have prosecuted the majority of the Nixon Administration with impunity.

Instead, Gerry Ford showed compassion toward Americans who fled to Canada to avoid the draft giving them a do-over. He accepted that they might not have been cowards or traitors, but rather idealists deserving of a second chance.

When Ford pardoned Nixon, he shifted the animosity on the left from Nixon to himself and pardoning draft dodgers did the same with the animosity the Right held. This effectively united both left and right in their disgust for Ford’s actions.

His political reputation and career were in tatters. Reelection was his nightmare. You could see the relief in his face when 1976 came around, and a soft-spoken peanut farmer took the mantle and continued the healing process.

By 1980 the Republic could hold its head high once again.

I wonder how long it will take this time.

One thought on “The Man Who Healed America”