This particular morning would be no different from any other morning that week. The sky above Andersen was full of B-52s heading out to drop their load over Viet Nam – Each evening a flock of B-52s would return, often smaller than when it left.

USAF Capt. Bob Amos picked up a combat mission for that day. There was nothing unusual about him making a combat run over Viet Nam, but on this mission, the mission order included the fact he was part of a thirty-ship bombing mission, his call-sign was “GREEN-TWO” – and a VIP would be along for the ride. 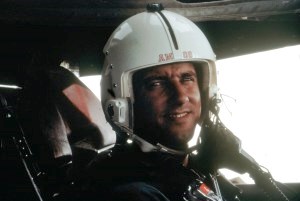 flights are generally a low point in any aviator’s career. They usually involve babysitting some old guy who is completely out of his environment and under the impression that he has some authority.

I can imagine Capt. Amos was less than enthused about having a VIP literally looking over his shoulder during a 12+ hour hot combat mission – the extra seat is just behind the pilot in a BUFF. If it were me, I would just be hoping the VIP had the sense to stay out of the way if things got weird.

At a minimum, having a VIP on board would stifle the shenanigans that naturally go on between six young men who know they may be sharing the same flying coffin. The pre-flight briefing added a complication – Today’s VIP was a Reserve General. He did have some authority.

Captain Amos recognized the General as a well-known screen actor. His rank was likely just “Hollywood Rank,” similar to what was bestowed on Ronald Reagan and so many other actors who didn’t actually serve except for PR and War Bond films.

Capt. Amos knew this guy was probably just another Hollywood “Whuffo” who never served in the military other than as a PR stunt. I’m fairly sure the entire crew knew this VIP best for his role as a heroic bomber pilot in a popular movie of the time.

This old guy probably even believed he was a real “Bomber Pilot” – getting stuck with a VIP like this would make any crew cringe.

What Capt. Amos didn’t know about this particular “Hollywood General” was that his rank wasn’t Hollywood – and he really was a combat-seasoned “Bomber Pilot.”  He didn’t need to do much acting in that movie, and the Captain wouldn’t need to babysit this General – He was no fledgling. 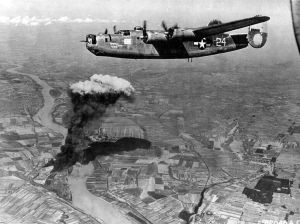 It didn’t take long for Capt. Amos and his crew to realize the General was more than capable as an extra Pilot and he fit right in with the flow of the crew.

I don’t have a clue what they talked about on the flight inbound but If Capt. Amos asked he would have learned that this General was worthy more respect as a warrior than was required by his rank.

In his family, he was just one in a long line of Soldiers who served this Republic over the years. Both of the General’s grandfathers served in the Civil War, and his father served in combat during the Spanish-American War.

Raised to understand that if his country called – answering was NOT a matter of choice. He passed this on to his own children – His son; a Marine Recon Officer was killed on a  mission in Viet Nam.

Working in his father’s hardware store as a boy sparked an incredible interest in all things mechanical. When Charles Lindbergh made his transatlantic flight, all that mechanical thirst turned to flight.  He saved the enormous sum of $15 and purchased a 15-min flight from a local pilot.

That was all it took – He was going to be a Pilot.

The boy’s father convinced him the Naval Academy was a poor choice but neglected to Point out the finest Military Academy in the world was just down the road at West Point. Consequently, he ended up at Princeton.

He graduated with a degree in Architecture but discovered his second love; after flying. He was more interested in acting than building. He began performing in plays, eventually gaining such popularity that MGM signed him to a multi-movie contract.

He was willing to give up his career as one of Hollywood’s leading actors and tried to enlist. To the great relief of MGM – he was rejected for enlistment because his 143 lbs didn’t meet the height and weight minimum for his 6’3” frame.

Being the hottest actor in town paid well, so he hired a dietician to help him gain enough weight to enlist. In  Feb 1941 – Long before the Pearl Harbor Attack and just 7 days after being presented the Academy Award for Best Actor – the 32-year-old actor finally managed to pass his physical – He enlisted as a private in the U.S. Army.

Even though he kept a low profile; didn’t park his Rolls Royce in the barracks parking lot or have his driver pick him up during duty hours, no one had any doubt who he was. The private did, however, keep his personal airplane down on the flight line.  He flew it home to visit anytime he had a pass.

Someone realized the Private held a Commercial Multi-engine Pilot Certificate and had almost five times as much solo flight time as the Army required to become an Army Aviator. He was sent to Flight School.  With the additional 200 hours he flew in training, he had more total flight time than his instructors.

To his disappointment – they made him one.

As a child he had been taught to do everything he did with all he had, he was a great flight instructor. He had a way of talking and a voice that would calm the most hysterical student. His natural command presence would take over and bring order to chaos, a talent that would come in handy in combat.

He knew his skills were better used in combat than teaching the basics of flight, so in the only instance I can find of this man calling in favors or using his friends to pull strings – He forced the Army to send him to a combat unit.

Assigned to the 703rd Bombardment Squadron in England as a B-24 First officer, he 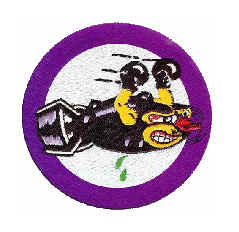 distinguished himself in Combat over Germany and was given command of his own B-24. He was eventually promoted to Major and participated in twelve Combat missions over NAZI Germany; most as the lead aircraft.

His unique speech and inherent command presence made it possible for him to keep his squadrons together and calm his crews no matter what the Germans threw at them. 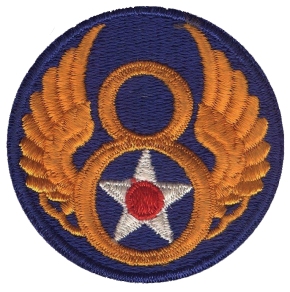 In July 1944 he was promoted to Chief of Staff, 2nd Combat Bombardment Wing, 8th Air Force and to the rank of Full Bird Colonel.

Twenty-two years later, GREEN-TWO dropped her load, and the group turned toward home.  Return trips were usually upbeat, especially since all 30 birds were headed home – all that was left was to put her on the ground, call it a day, and hit the Club.

With Guam on the horizon, GREEN-TWO started her checklist and final approach. The aircraft decelerating toward rotation speed, Co-Pilot Lee Meyers, hollered “Flaps are splitting!” – This was NOT a good thing.

The BUFF has a reputation for being an engineering anomaly that is actually incapable of flight. I’ve heard her described with great affection as “A half-million pounds of sheet metal, hydraulics, and ordinance; vibrating with such velocity that the earth revolts it from gravitational pull out of sheer embarrassment.”

“Flaps are splitting” means that not all sections of the flaps (required for slow flight – i.e. landing) were extending equally. The textbook result is for the ship to roll hard on approach and crash.

Capt. Amos decided to take GREEN-TWO out to a ditch area and have the crew punch out while he held the aircraft stable then punched out himself – a definite maybe as far as survival goes.  A BUFF won’t fly well with ejection seat size holes in her airframe.

The aircraft commander had one other problem – A  General officer on board. Ejection is hard on a young man, an old guy like the General would surely be injured.

The General’s voice came over the intercom with that same calming quality that served him so well over Germany – “Why Suure, Capn’ – Ah, Understaaand. You’ll do juss fine” 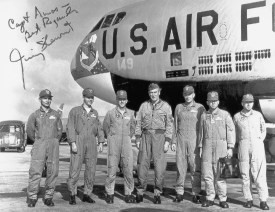 Having the general in a down ejecting seat meant if he ejected on approach, it would shoot him directly into the ground and take days to dig him out.

Capt. Amos flew GREEN–TWO out to an area where Crash Rescue was staged and tested his flaps every way possible. To everyone’s relief, the Split Flaps indication was an instrument failure – not battle damage, Capt. Amos landed her without incident.

In three wars and almost three decades of service General Jimmy Stewart  earned: 2 Distinguished Flying Crosses, 4 Air Medals, an ARCOM, a Presidential Medal of Freedom and a French Croix de Guerre with Palm (the highest award possible to a forighn soldier); and he climbed the ranks from Pvt. (E-1) to full Colonel (O-6) in just 4 years. He remained a Reserve officer, maintaining SAC flight proficiency ratings as a bomber pilot throughout his career as an Actor. He FLew combat missions in WW2, Korea and with Capt.  Amos and the crew of GREEN TWO over Viet Nam on his last combat mission.

Gen. Stewart is one of few Hollywood celebrities who were targeted by the McCarthy Communist hunts yet still came out smelling like a rose

Late in Jimmy Stewart’s life, when asked  about how he wanted to be remembered – He responded:

“I’d like people to remember me as someone who was good at his job and seemed to mean what he said.”

US Air Force Brig, General Jimmy Stewart made his final “Post Flight” on 2 July 1997 – don’t ya know the Michael and the Big Guy’s Air Wing did one hell of a fly-by when the General Reported in.

I’ll always remember you as the Warrior you are.  – Fratribus Sine Pari

“It’s a Wonderful Life” will take on a whole new significance to me this year.

US Air Force Brig, General Jimmy Stewart made his final “Post Flight” on 2 July 1997 – don’t ya know the Michael and the Big Guy’s Air Wing did one hell of a fly-by when the General Reported in.

Does anyone know where I can get a “Harvey is my co-pilot” bumper sticker for my Jeep?