“There was hardly one chance in a million that Fritz would be able to translate these dialects.”  –  Col. Bloor, 142nd Infantry, Commanding.

I went to the Post Office yesterday to find this year’s much anticipated Choctaw Nation Christmas ornament in my box.  As a student of history, I always look forward to the history conveyed with each year’s ornament. 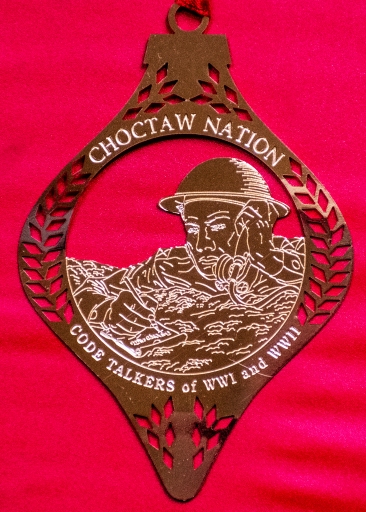 This year’s Ornament is special – It honors a group of American Soldiers that few remember and rarely get the credit or honor they deserve – The Native American.

Most people think of the WW2 Navajo Code Talkers but in reality, the first code talkers were actually used in the “Great War”.

It was 1918 – The Champagne Sector of France, during the battle for Blanc Mont Ridge, somehow the enemy had advance notice of everything the Americans were doing.

Colonel A.W. Bloor, Commanding Officer of the 142nd Infantry, came to suspect he had a leak or an infiltrator.

Trying to find the leak, the officer sent a wireless operator team to a remote location in the rear and broadcast a message indicating the team was with a convoy of ammunition and had become lost.

The fake response included the coordinates for the forward Ammunition Storage Point the convoy was looking for.  – Within an hour, those coordinates became a series of large impact craters. – The Enemy was, in fact, listening.

Colonel Bloor remembered that he had a company of Native American soldiers under his command.  A quick count revealed that Native Doughboys spoke twenty-six different languages or dialects, only four or five of which were ever written –  “There was hardly one chance in a million that Fritz would be able to translate these dialects.”  –  Col. Bloor, 142nd Infantry, Commanding. 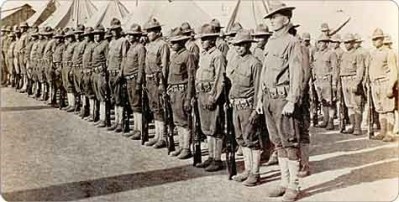 The Colonel had discovered the first Native American Code Talkers. Contrary to Hollywood, this was the origin of the Code Talkers.

The first recorded use of Native Code Talkers was in 1918 when the order was given to withdraw two companies from a precarious position. Col. Bloor ordered Choctaw Warriors to man the wireless radios and transmit in their native tongue.

If Fritz got wind, it would be a massacre. – The withdrawal was completed without mishap. The enemy’s complete surprise is evidence that he couldn’t decipher the messages –The Choctaw Warrior, Pvt. Joseph Oklahombi was one of those code talkers.

Despite knowing firsthand of the treachery inflicted on their people by the U.S. government, these Warriors had an integrity that would not allow them to violate their Tribal Father’s word of Honor.  The Choctaw Nation swore allegiance to the United States –They weren’t considered good enough to be citizens, but they would fight for the United States as a matter of honor.

At St. Etienne, France, on the night of October 8, 1918, a 24-man patrol, from the 142nd Infantry, including Pvt. Joseph Oklahombi and several other Choctaw Warriors were cut off from the rest of their company.

The Kaiser’s troops were operating with impunity. Well-coordinated and effective ambush operations devastated allied units.  The enemy lit up the Americans with a numerically superior enemy force including heavy machine guns and approx. 50 trench mortars.

I can’t find records of how many NCO’s or Officers were with the 24-man patrol but I am confident Oklahombi, as a Private, was not the ranking man.

If you have never experience the cacophony of battle and the smell of impending death, let it suffice to say it incites your rectum to bite holes in your skivvies but, also has a natural ability to choose the command structure. If there is a lack of Command Presence, the situation will appoint a leader and the rest will follow.  This is clearly evident in the actions of Oklahombi and his 23 buddies.

German accounts tell of the sound of whooping war cries, then screams, then another gun would fall silent, only to eventually spring back to life and bear down on German positions.  Four days and Four nights the Doughboys terrorized German positions into surrendering. by the fourth day of the battle, almost 80 Germans lost their lives and 171 chose to surrender rather than face the Choctaw Warriors in the forest. 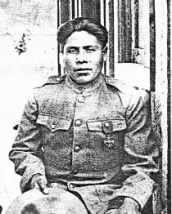 A French General immortalized the young Choctaw Warrior’s valor with these words:

Under a violent barrage, Pvt. Oklahombi dashed to the attack of an enemy position, covering about 210 yards through barbed-wire entanglements. He rushed on machine-gun nests, capturing 171 prisoners. He stormed a strongly held position containing more than 50 machine guns, and a number of trench mortars. Turned the captured guns on the enemy, and held the position for four days, in spite of a constant barrage of large projectiles and of gas shells. Crossed no man’s land many times to get information concerning the enemy, and to assist his wounded comrades.   – Translation of French orders awarding the Croix de Guerre to Pvt. Joseph Oklahombi.

Gen. Pershing awarded Pvt. Oklahombi the Silver Star with the Victory Ribbon and he received the Croix de Guerre, France’s highest honors for gallantry, from Marshal Henri-Philippe Petain personally. In spite of sounding cliché, the French Croix de Guerre orders did actually “lose something in translation” and references to the other 23 soldiers with Oklahombi were not included.

Pvt. Joseph Oklahombi was run over by a truck while walking on the road near his home in 1960; he died at the scene – His valor forgotten.

Things were not much better for Native Americans in the 40’s, yet when the United States came under attack on Dec. 7th – As is the Native American way, there were already warriors willing to answer the call and take up the bow in defense of this nation.

Most of us know of “Drunken Ira Hayes” – It causes bile to come up for me to even refer to him that way.  Ira Hayes a Pima Indian who volunteered to serve with the Marine Corps. Hayes was given the title “Chief Falling Cloud” by his fellow Paratroopers when he graduated from the Marine Corps Parachutist course – Ira was the first Native American to wear Jump Wings. 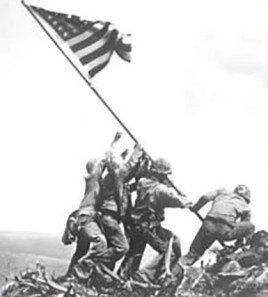 He was assigned to a parachute battalion of the Fleet Marine Force and he saw more combat than I even want to think about. Hayes is one of the Marines in that famous photo of the Flag being raised on Mount Suribachi.  – Hayes was one of over 250 Marines in his company when he landed on Iwo Jima – Less than 30 survived the battle.

Ira Hayes dies of acute alcoholism in a cotton field on the Reservation one night in 1955. His valor forgotten – except for a song about a “Drunken Pima Indian”. 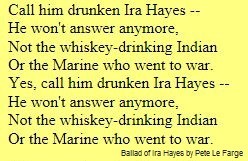 By the time Korea and Viet Nam rolled around, Native Americans who served were given more credit and did receive the honors they deserved but there was still a stigma attached to being an “Injun” and if you looked like one it was a distinct disadvantage.

Simpson Evans was Choctaw, but like many Choctaw, he looked more European than Native American. Consequently, his Native American status was not known until long after he proved himself under enemy fire and he was able to climb the ranks like any other Naval Officer. 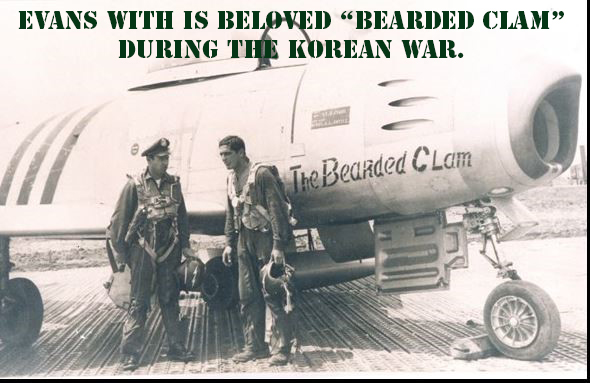 Capt. Evans flew in three major wars; he flew Bombers in the Pacific in WW2, Fighters in Korea, achieving 2 enemy kills, and during Viet Nam, Evans was involved in a Dog Fight that no man of his age had any business fighting – Uncle Simpson prevailed and the enemy ran for home.

During the Signing of the Japanese surrender on the USS Missouri, there was a flight of fighters circling above; Simpson Evans was flying Wingman to the flight commander.

I had the privilege of meeting Capt. Evans once.

It was at a funeral, well it wasn’t exactly a funeral per se; it was this thing they do in the south called “Decoration.”  It takes place at the family cemetery and is a cross between, a rodeo, a drunken brawl, and a church service.  I was doing a stint at JRTC in Fort Chaffee when I met this hot little “Blue Eyed” Choctaw girl.  Needless to say, I made it a point to frequent JRTC anytime my kind was needed.

She invited me to go to “Decoration” with her and, not having a clue what it was, I accepted.  I wasn’t expecting to meet 400 family members at the cemetery.  There was one older guy, a kind of an intimidating and anti-social looking character who seemed to be avoiding the masses. At one point we both meandered in the same general direction ended up face to face.

He greeted me with: “Who the (expletive deleted) are you,” then looked me up and down a couple of times and continued – “Yer military aren’t you?”  I nodded affirmatively and told him who I was with.

He grinned – “Good; as long as you’re not family – I hate this shit.”  He told me who he was and offered me his hand and a flask.  Uncle Simpson, as my girlfriend called him, was a pretty good ole’ boy in my mind, I didn’t yet know his history, but I knew I liked him.

In the 25+ years since I’ve heard a hundred stories about Uncle Simpson and even if half of it is true …  He was one Bad dude.  There is one story I know to be true and it makes me proud to be related to the Captain, even if it is only by marriage.

During Korea, pilots were given the locations of POW camps and re-education centers so they wouldn’t mistake one for the bad guys and attack a POW camp.   Pilots would always take advantage of targets of opportunity with any non-expended ordinance and hopefully knowing these locations would prevent an accidental bombing of a camp or convoy full of Americans.

Capt. Evans earned himself a collection of both verbal and written reprimands because the last thing he would normally do after a mission was to look for a POW camp on the way home, and before he went feet wet,  he would make a mock attack on the camp sending the North Koreans into their shelters, then make a low fast pass over the camp doing a victory roll and hitting afterburners as he left.  He told me he wanted to make sure they knew we hadn’t forgotten them. – The boy had Watermelons of that there is no question.

Capt. Evans died of natural causes in 2010 – A US Navy missing man formation fly by and a combined Choctaw–USMC honor guard escorted the Captain home.

His valor is not forgotten.

Now let’s do the same for Pvt Oklahombi and the ones who stood in the gap with him.