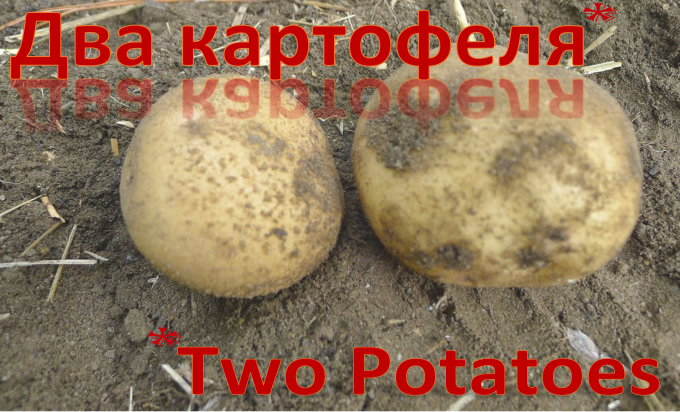 During the 70s and 80s I was part of a NATO HUMINT (Human Intelligence), Operation working in Eastern Europe.  My operational partner was an  Estonian named Heinrich.

Before Heinrich was recruited to work with us, his family ran an anti-Soviet newspaper in Leningrad – He was not popular with the Millitz. Eventually, he had to get out of the Soviet Union or end up in the Gulag.  Someone in NATO decided to extract him, and recruit him to work for our side.

Heinrich originally did propaganda broadcasts in Russian aimed at Soviet Soldiers in DDR. Then went into the field on the ground.  We were paired up right out of the Operators Course and worked together  until I was arrestedn in 1987.

Heiney had a weird habit of using the phrase “Two Potatoes” …  He said it all the time.

Finally, I asked him just what in the hell “Two Potatoes” was supposed to mean, cause no matter how or to what I translated it to; it still just meant 2 edible tubers – “Two Potatoes”

Heiney grew up under Khrushchev and Brezhnev, during the heyday of Soviet Democratic Socialism. His parents survived WW2 and Stalin –  He lived it during the darkest years since Stalin.

Heiney explained “Two Potatoes” was exactly that – 2 edible tubers.
It stems from the early days of Democratic Socialism, Stalin, the purges, and the starvation that came with each “Five Year Plan.”

… Two more days that your family would eat. “Two Potatoes” meant you wouldn’t starve; at least not this week.

As the years passed, the Soviet system of Deomocratic Socialsim began to crumble, and things got better with Western intervention and U.S. Wheat shipments.

Think on that a moment…

“Two Potatoes” was just about as good as it got for Heinrich and his family under Democratic Socialism.

Behind the Iron Curtain,  just surviving was considered an accomplishment. The best you could expect is the prospect of not starving before Friday.  I can remember even in the ’80s, we always took loads of canned meats and baby formula anytime we made a run into a Communist country.  First it was effective in a bribe, and second, the odds were that our contact person needed it to feed his family.

The entire Soviet system was Democratic Socialist and Bernie Sanders’ senile misunderstanding and inability to grasp that a Social Democracy, like the Scandinavian region, uses is NOT Democratic Socialism. Look up the definition of Socialism. I don’t need to; I lived it for over a decade of my adult life.

Let’s not forget what we fought for 5 decades. – or that it oppressed 1/3 of the world for 50 years. Don’t let some senile old fool redefine the greatest evil of the 20th century and pretend it isn’t. Then consider the fact: Democratic Socialism is not a legitimate or legal form of government under the Constitution for the United States.  (Art 4 Section 4)

It appears that the American people are just too complacent, or maybe it is ignorance, to recognize the enemy — even they admit to being the enemy, as Sanders and Cortez openly do.

This is how we ended up with  NEO-Nationalsocialist in the oval office – ignorance at the grassroots level – and the reason the trump will likely be reelected. The Republic will never recover.

I know Putin better than most, I can even tell you what Vodka he drinks and his preferred way to kill someone when he wants to send a message…. He is rejoicing at the chaos we have immersed ourselves in – He can’t lose; NO matter which party takes power in 2020.

If you call yourself a Democratic Socialist – You are no less the enemy than the trump and his NEOs.

Personally, I am ashamed to be American anymore.

One thought on “TWO POTATOES”