As Americans, we tend to have an unusual attitude about most things, especially War and our War Dead. My European colleagues always thought our way was irreverent and borderline disrespect.

The rest of the world mourns their War Dead on Armistice Day, Remembrance Day or something similar. It’s usually held on the 11th of November coinciding with the Nov. 11th armistice of WW1.

Americans have been honoring our War Dead with a celebration for a half century longer than the rest of the world… only we do it completely differently.

While the rest of the world gets solemn and all teary-eyed on Nov.11th, Americans choose to “Celebrate” our War Dead on a fine spring day, and make a weekend of it.

Sure each of us who have experienced a personal loss in one of America’s wars mourns that personal loss – When my mother passed away, her two most prized possessions were passed down to me – Two Folded American flags.

We mourn each Warrior, who “gave that last full measure” individually, but as a nation, we celebrate their life and honor their sacrifice with Memorial Day.

We mix the mourning with a sense of pride that eclipses everything else… We throw a party.

It shouldn’t be a surprise that we honor our War Dead in a more festive way than most nations.  We are also the only nation in the world to adopt a popular drinking song as their National Anthem.

Francis Scott Key set the words of his famous poem to the music of an old British Drinking song and long before it was adopted as our National Anthem it could be heard sung, drunken and out of key, in most patriotic saloons and drinking establishments across the land.

The next time you’re in a bar and things are getting tedious – just buy a round for the house and lead the patrons in a fiery rendition of the Star Spangled Banner.  Guaranteed to turn it into a good-time.

Memorial Day was originally established by members of the Grand Army of the Republic — they named it “Decoration Day” because the purpose was to “Decorate” the graves of Civil War Dead.   Officially the origin can be traced back to Maj. Gen. John A. Logan, who implemented General Order No. 11.

“The 30th of May, 1868, is designated for the purpose of strewing with flowers, or otherwise decorating the graves of comrades who died in defense of their country during the late rebellion, and whose bodies now lie in almost every city, village and hamlet churchyard in the land…” General Order No. 11.

Logan is reported to have selected May 3oth because flowers would be in bloom all over the country.

Today, no less than 25 places claim the title of “birthplace of Memorial Day” including; Macon and Columbus, Ga., Richmond, Va. and Boalsburg, Pa.

A marker at the Carbondale Ill. Veterans Cemetery states the first Decoration Day ceremony took place there on April 29, 1866 – Gen. Logan’s family lived in Carbondale during the Civil War so that one is probably accurate.

It makes little difference what the actual origin of the celebration might be; the one thing we know for sure is – Memorial Day started as a celebration to honor America’s combined Civil War dead.  By the end of WW1, it had evolved into a universal celebration of the lives of all American War Dead.

Historians generally accept that the all-encompassing nature of today’s celebration has its origin in one of the first Decoration days.   On April 25, 1866, a group of Confederate widows in Columbus Ga. went to the local cemetery to decorate the graves of Confederate Soldiers who had fallen in battle at Shiloh.

The graves of Union soldiers were in a separate section and had been neglected because they were the enemy.  The thought of some mother’s child being neglected in those graves stirred the motherly instinct in these fine ladies, and they decorated the graves of the Union Soldiers, their husbands and sons had died fighting, with the same respect an honor as their own kin.

In 1968 Memorial Day was one of the four holidays that were moved to perpetual 3-day weekend status by the “Uniform Monday Holiday Act.”

Prompted by an effort to mitigate the disruption of manufacturing that occurred with fixed date holidays that tended to fall midweek, the Act moved Memorial Day and three other traditional date holidays to a specified Monday to create three-day weekends.

In December 2000, “The National Moment of Remembrance Act,” P.L. 106-579, was signed.  Although not statutory, it encourages all Americans to pause wherever they are at 1500hrs local time on Memorial Day for one minute of silence to remember and honor those who have died in service to this Great Republic.

There are some of you who will just never be able to celebrate Memorial Day because it falls on a painful anniversary.  I understand, and I stand with you.  Personally, I don’t do the 4th of July for the same reason – the first time that “Black Sedan” came for my mother it was at an Embassy 4th of July Pic-Nic in Rome, Italy in 1966.

My old Omi used to tell stories of the KZ. She lost most of her family there, and she had a tattoo the same place as mine. Only hers was just a set of numbers with the words “Nur für Offiziere” below the numbers.  She always seemed to share only the good memories, she never spoke of the horrors that happened there.  If she was ever sad, she never showed it in public.

I know what happened to her in the camps, and how many of her own perished there – One day I asked her how she kept such a positive attitude.  She told me “as long as we sing their songs and tell their tales – they aren’t really gone.”   Omi was a wise old woman.

I mourn my Brother and my Father, and I mourn the ones I walked with… but I stand DAMN TALL when I do it. 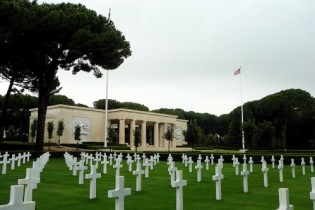 I like to believe they are all waiting for us at the East Gate.  I’ll finally get to render a salute to men like Tibor Rubin and women the likes of Molly Corbin.

I figure when everyone gets there, Michael will form us up, and  Sergeant Major Plumley will call cadence as we march in together.

If you can’t celebrate on Monday… at some point during the day, please try to focus on a good memory or tell a story; one that would make both of you laugh out loud – you might find a smile emerging from the tears.